When a hail storm strikes, the damage can be catastrophic for homes, businesses, agriculture and infrastructure. In fact, with damage totals sometimes exceeding $1 billion, hailstorms are the costliest severe storm hazard for the insurance industry, making reliable, long-term data necessary to estimate insured damage and assess extreme loss risks.

That’s why a team of NASA scientists is working with international partners to use satellite data to detect hailstorms, hail damage, and improve our understanding of hail frequency. This project will provide long term regional- to global-scale maps of severe storm occurrence, catastrophe models, and new methods to improve short-term forecasting of these storms.

“We’re using data from many satellite sensors to really dig in and understand when and where hailstorms are likely to occur and the widespread damage that they can cause,” said Kristopher Bedka, principal investigator at NASA’s Langley Research Center in Hampton, Virginia. “This is a first-of-its-kind project and we’re beginning to show how useful this satellite data can be to the reinsurance industry, forecasters, researchers, and many other stakeholders.”

The image on the left is a Geostationary Operational Environmental Satellite (GOES-16) visible and infrared brightness temperature sandwich image of a severe hailstorm in northeast Montana on July 21, 2018. This storm generated 87 mph wind gusts and hail up to two inches in diameter. A overshooting cloud top was identified by a NASA algorithm and an above anvil cirrus plume was also generated by this storm. The image on the right is a Global Precipitation Measurement (GPM) mission 19 GHz microwave brightness temperature. The extremely cold temperature in the center of the image indicates a very high likelihood of hail.

These expansive satellite datasets provide essential knowledge to regions that lack routine hail event reporting from continuous, long-term weather radar observations, the media and the general public. A current priority for the team is to develop an innovative hail risk assessment over South Africa, where hailstorms are responsible for nearly half of the total value of insured natural catastrophe losses.

Also Read: How the telecommunication industry is getting reshaped with geospatial technologies

For this project, NASA is collaborating with Willis Towers Watson, a company that provides global advisory and brokering services by working with clients to better understand risk and provide financial resilience against extreme loss-making events such as hailstorms. The company’s reinsurance broker, Willis Re, works with academic partners to develop new industry tools based on the latest insights and methods.

Willis Re is working to expand its catastrophe model capabilities for all of South Africa and all lines of business at risk from hail, including property, motor, and agricultural claims. This catastrophe model will be used to help clients in insurance and reinsurance to develop their own view of risk for their region, which will include the probability of extreme losses and a more accurate estimation of average annual losses due to hail.

Hail catastrophe models being developed by Willis Re require extensive analysis of hail events to quantify characteristics such as the length, width, duration, intensity and movement-speed of storm activity. These characteristics are identified in this project from long-term trends in geostationary satellite data with additional views from satellites in low Earth orbit. These models create synthetic hail events — over many tens of thousands of simulated years — that match these characteristics, followed by additional analysis to derive hailstorm frequency and financial impact to a given insurer’s portfolio.

Though scientists aren’t traveling the world to observe hail directly, they are able to use information from a number of different satellite instruments to “see” a historic record of where hailstorms have occurred. 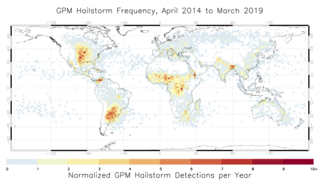 Climatology of annual frequency of hailstorms, as detected using the passive microwave imager onboard the Global Precipitation Measurement (GPM) mission satellite between April 2014 and March 2019. Data have been normalized to account for gridding and GPM’s orbit.

“Hail is formed within strong thunderstorm updrafts that have unique appearance in geostationary visible, infrared, lightning imagery and low Earth orbit passive microwave imagery.” Bedka said. “We are focused on detecting these patterns in a consistent way throughout as long of a satellite data record as possible.”

A hailstorm frequency analysis from geostationary data records was developed by NASA and Karlsruhe Institute of Technology to estimate hail frequency over Europe and Australia, which will be extended to South Africa and South America.

ESA’s Copernicus Sentinel-2 MultiSpectral Instrument captures pre- and post-hail damage swath imagery on the border of Montana and North Dakota in July 2018. The July 9, 2018 true color image (left) shows surface conditions prior to the July 21, 2018 severe storm. The July 24, 2018 image shows a visible damage swath in northwest to southeast orientation, from intense thunderstorms that moved through the region on July 21, 2018 bringing damaging winds and large hail.

NASA’S MERRA-2 reanalysis model provides an important 3D view of the temperature, moisture, and wind environment that the hailstorm is in. Analysis of the storm environment is very important to differentiate storms where hail is unlikely due to weak instability or wind shear that cannot sustain strong updrafts. In addition, hail that falls from storms with a deep layer of warm air in the lower atmosphere will likely melt before it reaches the ground.

Views from high resolution land surface imaging satellites can reveal long tracks of visible damage on the ground. These hail damage swaths are frequently found in the central United States. They have also been observed to impact crops in other leading agricultural areas of the world, including Brazil, Argentina, South Africa and Europe.

“It is hoped that this hail risk modeling capability will be applied to Willis Towers Watson’s major reinsurance clients to help with the pricing of reinsurance contracts and assessing capital and reserves to meet regulatory requirements” said Geoffrey Saville, senior research manager for the Willis Research Network’s Weather and Climate Hub. “By leveraging our research relationship with academic partners at Karlsruhe Institute of Technology in Germany, and being a part of this NASA project, we can not only provide a business rationale to develop the new techniques to assess hail risk, but also work with clients in South Africa to manage the risks of severe storms and support business and personal insurance.”

This blog was originally published here.

Always one step ahead in infrastructure, technology solutions – Geospatial World